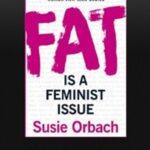 Fat is a Feminist Issue (FIFI) wasn’t the book I was expecting to read at all.

And the fact it wasn’t was even hidden under a new preface called FIFI today, which lulled me into a contented sense of knowing what this book was going to be.

The new preface brilliantly and harrowingly brings the debates up to date – with the rise and rise of the importance of image via social media; the increase in eating disorders affecting men and boys as well as women and girls and of course the big issue that fat, or rather the pursuit of thin, is very much a white western concept.

Whilst Orbach’s original case studies were from a variety of age groups and class backgrounds, they were primarily white and all western. However since initially writing and publishing Fat is a Feminist Issue in 1978, the ubiquity of the cult of thin has gone global and now there isn’t a country in the world that isn’t influenced by it.

Then the ground moved, erupting into the unexpected.

But therein lies the beauty not only of this book, but of reading classic feminist texts in general. We learn so much, not only about the feminist thinking that has gone before us, but about the shape of the movement itself and the forms of its activism.

Because what Fat Is a Feminist issue shows us from the off, is that at the back end of the seventies, women were coming together in groups. They weren’t taking what was happening to them, through them, and around them, lying down anymore. These women were mobilizing.

We want to be fat 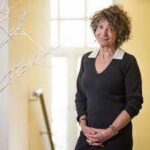 Susie Orbach’s thesis is that we get fat because we want to be fat. Fat answers something that we’re not able to do or be if we’re not fat.

Let me just take a moment, whilst that’s settling in for you, to remind us all that this is a psychoanalytic approach. As Orbach explains:

“When something is ‘amiss’ […], we can expect a psychological imbalance and reaction. Few things could be more ‘amiss’ than the attempt of a patriarchal culture to inhibit a young girl’s desires to be creative and expressive, to push her almost exclusively into restrictive gender-linked activities, thoughts and feelings.”

In this context Orbach says, “Fat is a response to the many oppressive manifestations of a sexist culture”.

Fat helps us to feel as though there’s enough of us to go round, to nourish and give love to others from; it helps us to feel more substantial, to take our place in a society that makes us invisible. The fat is ours, it allows us to have something that belongs just to us; our fat speaks for us. We believe, unconsciously, that it helps us say ‘no’ and to assert ourselves, where we feel we have no voice, no ability to do so otherwise.

Diets fail, according to Orbach, precisely because we want to be fat and we fear what will happen to us when we become thin. Through the dieting culture we have an experience of being thin and it is scary.

Being thin brings with it an identity firstly that feels ‘other’ to who we really are, and secondly, an identity that has consequences – we dress differently, are noticed by men, and become potentially more sexually promiscuous (because our fat is no longer there to say our ‘no’ for us, and we have no other means of expressing it).

Orbach offers a number of theories that make a lot of sense as to how we have landed here. The diet industry, working in tandem with patriarchal culture, effectively has us doubting ourselves as women. We believe we cannot trust our own judgement, we cannot trust ourselves to make the right decisions about what we eat, when we eat and how much we eat (and then, as compulsive eaters, we conform to this distrust, behaving ‘badly’ by binging).

Orbach’s theory is that our bodies know exactly what it is that we want and need to eat, and again she offers ways in which the compulsive eater can reconnect with her body.

Why read this book?

This is a powerful read. It turns the notion that we want to be thin on its head and is incredibly useful in asking us individually to reach inside and find our own symbolic meanings of fat and thin.

There are so many points Orbach raises that I haven’t had chance to touch upon – the power of the food industry, the impact of capitalism both on the issue of sexual inequality (which still reign today) and on the dieting and wellness industries; issues of female expression and the ways in which, unconsciously, we prepare our daughters for a life of inequality, to name but a few.

A big take away for me is the power of the feminist movement at a particular time in history, the late seventies, and specifically of the ‘consciousness raising’ groups that were in play during second wave feminism.