Our garden belongs to the spiders 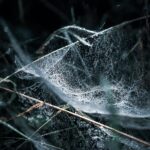 It is crisscrossed with threads of web making. Only last week one such was strung from the corner of the house by the back door to the fence opposite. Accessing the garden was impossible without crashing the thread.

Aimée and I had watched the spider in question making the heart of her home earlier in the week, squinting in awed silence as she worked, our bodies bent double, leaning forward, but not too far. As the light flashed the web appeared and disappeared from view; only the little spider, suspended black and golden in the air, acted as our constant marker that it was really even there.

Eventually, a friend came round for coffee and insisted we take it into the garden (it was one of the last late days of summer after all). Words faltered only half spun as I tried to explain my hesitation but he was already through the web and marching to the end of the garden, where the two chairs and little table sat invitingly unused under the shade of the plum tree.

The chairs and table were themselves, I noticed, critical architectural supports in the web-spinning world of my spider friends. I felt every jolt and bump on the line on behalf of the weavers as he and I sat, shuffled and shifted, drinking our coffee in the dappled light.

Later, the damage by the back door already done and clearly too catastrophic for even the most intrepid arachnid to repair, I returned to the garden. I sat in the chair under the plum tree and drank in the jewels of our mostly abandoned garden whilst I ate my lunch. Red strawberries hung drunkenly over the edge of the trough on the far side wall; next to it four fat beef tomatoes tried their hardest to outshine them and in the plum trees – one behind and one opposite me – deep and darkly violet fruit hung.

Gathering the gifts of this slim but frankly impressive harvest (that the garden fruits and grows without my tending to it!) I found at every turn, there was mistress spider, and here her sister, and there an aunt. Webs on all sides – some quiet and well-stocked, others full of activity, with the owner dashing around on a busy DIY mission – created accidentally by my reaching in to pluck a plum.

I decided plum collection could only take place from angles that wouldn’t disturb the spider highways – inadvertently fulfilling the rules of the ‘honourable harvest’ – to only take half, and never take the first. In previous years our plum trees have barely fruited – they are still only young and they flower slightly off-kilter with one another in the spring, making pollination more of a challenge. I have no idea whether plum trees are always so intricately laced with webs or whether this is a broader indication of the ‘health’ of our particular trees. Untended as they have been they are probably denizens of all insect life. And to be honest, some of the fruit I left behind was pockmarked and already belonged to the consumption of another. 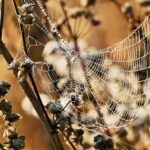 The quiet gathering, the dodging of silk nets as the spiders lounged and lasered around me was witchy work. Witchy crop gathering, witchy because, unusually, I was allowing my day to be led by intuition rather than my to-do list. Witchy because that is the vibe of autumn. It is time to draw in, to nest, time for the darkness to creep back in, the stars to come out earlier, for soups to bubble on the stovetop, for fires to be lit. It is a time for dreaming, for the imagination to work its magic, as noisy day is pushed back and back into its rightful 9-5 slot.

I had an ancestral sense, standing there in the glowing green of the garden, of women like me, who throughout history have been unwilling to unnecessarily destroy the art and industry of a spiders web.

For no matter how instinctively we might recoil at the jagged action and speed of arachnid movement when we stand in the fullness of ourselves and the spider, we see only a hardworking, quiet creature, more scared than to be scared of. We regret being the cause of her dart and flash to fix our blundering breaks, her extra load of activity. We see, no doubt, a mirror of ourselves – busy women, leading lives made busier by forces that feel unseen and outside of nature.

1 thought on “Our garden belongs to the spiders”